Sidney G. Saltz has been a prolific author, writing numerous articles that deal with various aspects of real estate law, as well as books about commercial leasing and the role of the commercial real estate lawyer. The Lawyer's Uncommon Guide to Commercial Leasing (pictured to the left) discusses how a variety of issues, over and above reviewing and negotiating the contents of a leasing document, exist and furthermore how a lawyer must take into account these issues in order to complete a transaction. From the type of property involved to the various lease provisions, an attorney needs to gain familiarity with them in order to be an effective advocate and counselor for the client. Drawing on his years of experience as a commercial real estate lawyer, author Sidney G. Saltz shares his knowledge and insights about the leasing process in this general guide for lawyers and law students.This book, published by the American Bar Association, was released in 2014. 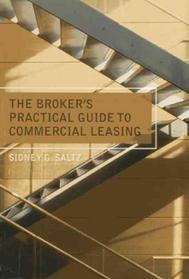 Written and Edited by Sidney G. Saltz in the Real Estate Law Journal- 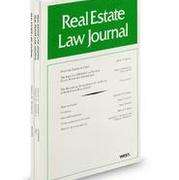 Articles by Sidney G. Saltz published in the 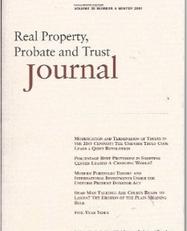 From Handshake to Closing: The Role of the Commercial Real Estate Lawyer (pictured to left), was published by the American Bar Association. The first edition was released in October 2007, the second edition was released in July 2010. As a result of Mr. Saltz's participation in RPTE activities, his writings and the quality of his work on transactions in numerous states, he has acquired a national reputation. 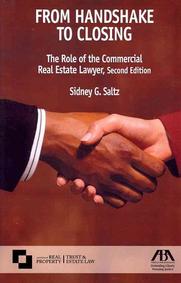 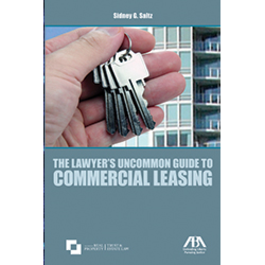 The Broker's Practical Guide to Commercial Leasing (pictured to the right) pokes holes in lease stereotypes and provides a clear, concise explanation of the legal issues commonly encountered in commercial leasing transactions. This book, published by the American Bar Association, was released in February 2014.